Concussions classify as a type of mild traumatic brain injury (mTBI). Concussions used to be a concern following falls, car accidents, and other forms of spontaneous head trauma. Now the fear of concussions permeates the entire activity landscape ranging from recreational activities to youth athletics. The risk of a concussion increases with younger children. A culture of education helps temper fear and paranoia which makes parents and adults apprehensive about activities. Proper information empowers people to understand not only how to prevent concussions but also how to treat and recover from an injury. Concussions impact body structures and tissues and impact all facets of proper function. Younger people also require longer recovery times than adults and require proper attention to cognitive, affective, and behavioral symptoms. 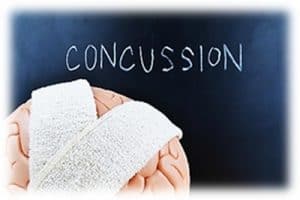 In 2017, in the United States, an estimated 2.5 million high school (Secondary School in Ireland) students reported having experienced a concussion related to playing a sport or being physically active. According to the World Health Organization (WHO), 70-90% of all treated brain injuries are mild, and that the incidence of mild traumatic brain injury (mTBI) globally is probably above 600/100,000 population, which is about 1 in 167. Having one concussion increases the risk of future concussions. The likelihood of a concussion increases for athletes playing multiple sports.

In 2018, the Irish Rugby Football Union (IRFU) released a ‘Concussion Wallet Card’ that includes a graduated return-to-play (GRTP) strategy. This concept is a great idea to reduce further risks associated with concussion.

In 2017, PLoS One, stated “in contrast to the prevailing view that most symptoms of concussion are resolved within 3 months post-injury, approximately half of individuals with a single mTBI demonstrate long-term cognitive impairment”. Additional concern exists for the underreporting of concussions. Approximately 40% of students experiencing a concussion reported that their coach or sponsor did not recognize the symptoms of the injury. Participating in activities after experiencing a concussion increases the likelihood of a repeat injury or a more severe condition.

Chiropractic plays an important role in the health and recovery of every person afflicted with a concussion. The body possesses established tissue injury thresholds. Excessive acceleration or deceleration of the head and neck usually produces concurrent injury to the joints and soft tissues of the cervical spine. Evidence-based research proves that injury and dysfunction of the cervical spine results in numerous signs and symptoms synonymous with concussions, including headaches, dizziness, and cognitive and visual dysfunction.

Clear evidence indicates that scientifically based spinal assessments and rehabilitation positively enhance the healing process following an incident of brain trauma from a concussion. Addressing cervical spine dysfunction continues to be a critical element in concussion recovery as evidence and data advocate for proper recovery methods. Chiropractic offers a pain free method for returning the body to a state of maximised function and restored health. Using a Chiropractic approach to concussion treatment does more than just treat symptoms. Chiropractic care revitalizes performance and restores quality of life.